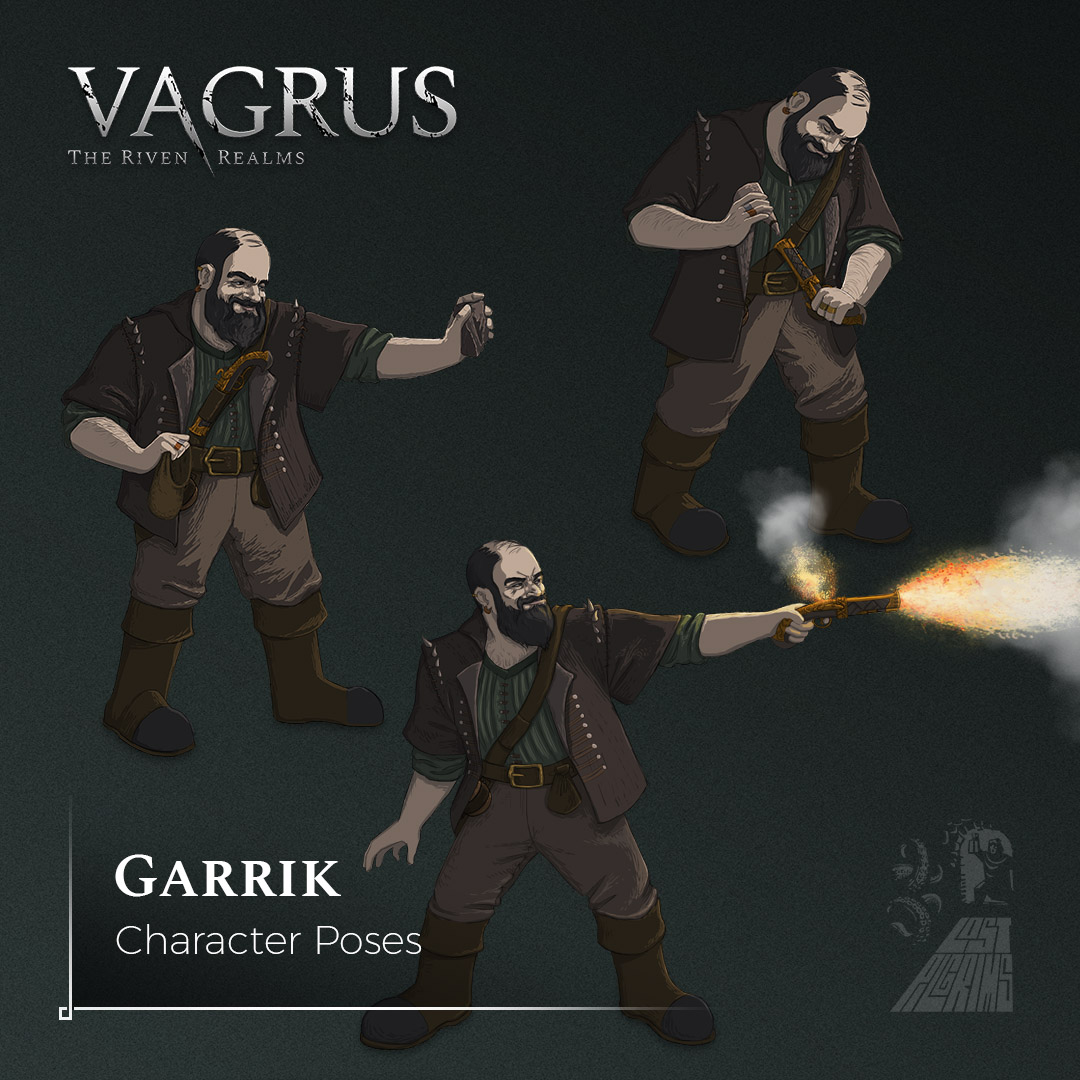 In this post dedicated to character poses and skills we are taking a look at the sleazy Dwarven smuggler and budding criminal mastermind Garrik.

Garrik is ranged support character with some very unique mechanics, so he will not be very efficient in the frontlines. In fact, he does not have any melee skills but is still fairly sturdy. All his attacks ignore Armor and even though not all of these are direct damage skills, Garrik can be extremely devastating when used correctly.

Pistol Shot: Dwarves of the Third Age managed to unlock the secrets of gunpowder before the Calamity and some contemporary members of the race still possess ancient artifacts that utilize this obscure technology. Garrik sports a masterfully crafted pistol of ancient Dwarven design that he uses to brutal effect. Pistol shot is a highly damaging Skill with fairly low accuracy but amazing Critical Chance. It also consumes almost all of his Power when used.

Salvaged Rune: Garrik reaches into his bag of collected magical runes (all salvaged from Dwarven ruins) and quickly uses its power on his enemies. Such rushed actions may not work out well however, as some of the runes in the bag are more useful than others. Essentially, the effect of the skill will be randomly chosen from several versions. Some may damage or debuff foes, while one may even heal them. Though risky to use, Salvaged Rune does not consume Power and can thus be used at all times.

Gas Bomb: Garrik throws a bomb containing poison gas, which effects an entire row of enemies. It deals minor damage and applies a debuff on every enemy in the row that lowers their Accuracy and Defensive stats.

Lock and Load: Garrik reloads his pistol and prepares his weaponry for another round of use. This skill essentially recharges his Power so that he can shoot again or use one of his other skills. Lock and Load also gives Garrik some additional Accuracy for a short while, making his next shot more effective.

Though extremely useful, Garrik remains somewhat of a wild card in combat due to his changing potential to sometimes do high damage. Outside of it, however, he is very useful when trading or when trying to con people. He's also a Supercargo, a Deputy role that is extremely good at striking good deals and protecting your precious cargo from all kinds of peril.