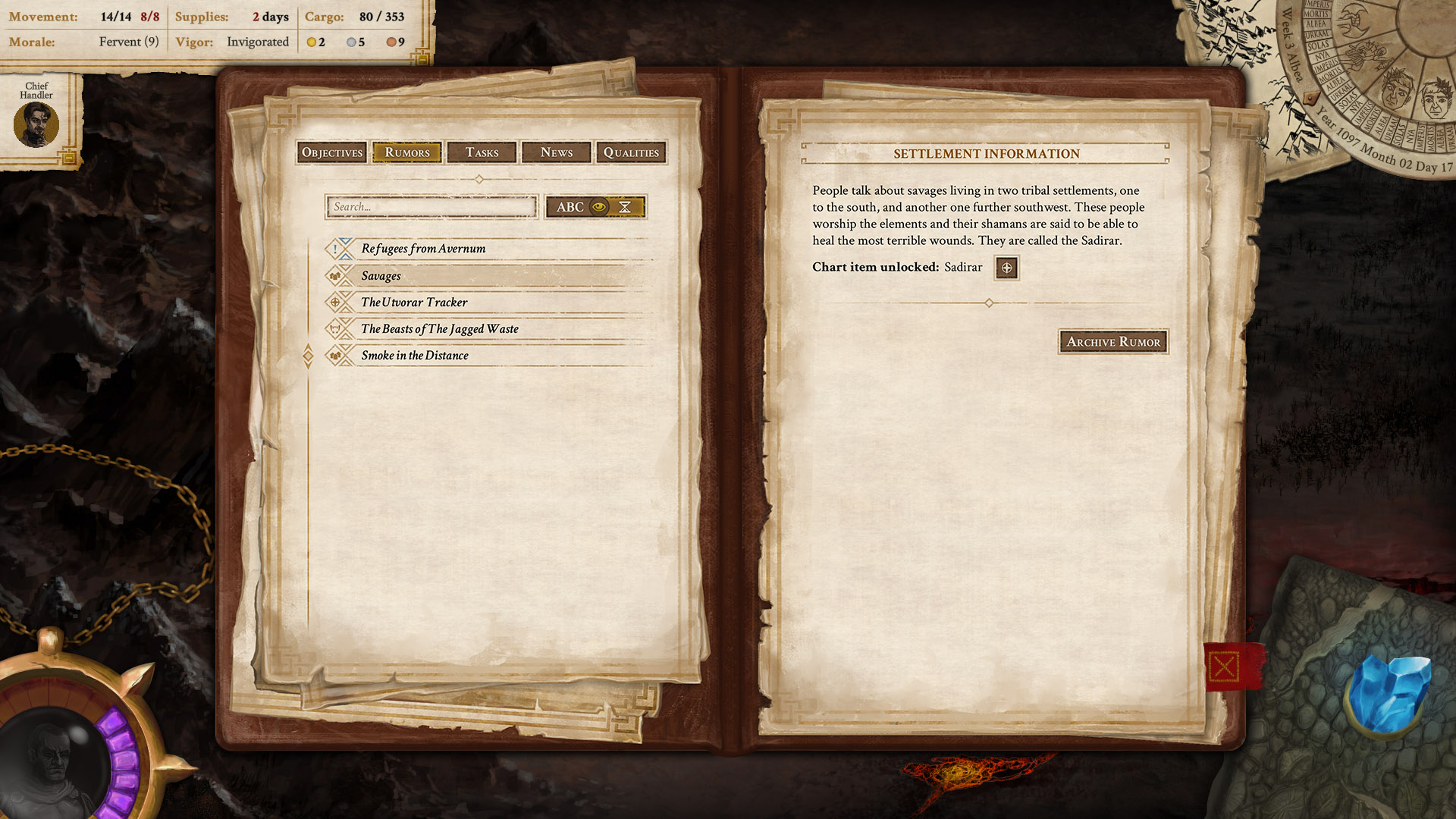 Another crucial game mechanic that is being added to Vagrus as we are writing this is a system of Rumors. Rumors are short entries in your Journal that are meant to guide players to content and unlock locations on their Chart in order to help them plan journeys and find places. We have come to the conclusion during playtesting that not only do we need to differentiate these Rumor entries from your Objectives in the Journal but we also need to separate them entirely and move them to a different pane. As evident from this, Rumors have undergone quite a lot of change since their original conception.

Rumors can be found in Events sometimes or can be bought in settlements (in mansios, specifically) from a semi-randomly generated list. You will be able to discern from the list what each Rumor can grant you but not the specifics. We are still tweaking the way they generate but a certain randomness is going to play into it, so expect to rarely see the same set of Rumors in different playthroughs.

There are several types of Rumors we are planning to add:

This type of Rumor unlocks a settlement or point of interest location on your Chart. Apart from running into such places by wandering around, this is the only way to discover map locations.

Provides Information on a Storyline

This kind of Rumor points the player in the direction of a potential storyline or quest and gives hints on how to initiate it. Though the text is short, players may have to consult the Chart or explore a bit to find the exact place.

Provides Information on a Settlement

Information on a settlement's trade opportunities (what goods sell there for a good price), unique inhabitants, or important characters (such as the rare blacksmith or a powerful mage). Some of these might end up being generated to match the ebb and flow of markets around the Empire.

These Rumors inform players about the dangers of a certain region or even provide hints on creatures and their habits that dwell there.

There might be other types added later but these four we would certainly like to appear in the game eventually.

In order to avoid keeping track of a huge amount of already obsolete Rumors, players will have the option to 'retire' a Rumor, that is, to move it into a searchable archive section of the Rumors list. This will be necessary to do from time to time for transparency's sake.

We feel that Rumors will play an important role in how players manage their goals and objectives, as well as in the way they explore the unknown and perilous reaches of the Riven Realms, so we will most definitely keep expanding on the concept as development goes along.

Wanna get the game ready for you the earliest with even more content? Please share our pages and posts with your friends through your favorite social media channel(s). Appreciate it!