In the previous part of our Companion Combat Guide (Part 1: The Basics) we left off at discussing the Leader's role in combat after outlining the basic rules of an engagement. In this part, we'll cover the actions that Companions can take during their turn.

All characters can Move to any adjacent position on their side of the battlefield. If they move into a position that is occupied by another character, that character is pushed out of the position it occupies and has to be moved into an adjacent free position (even to the position the moving character has just left).

Melee Skills, of course, can only be used from the front row. Additionally, not only do characters in the front row prevent melee attacks against characters directly behind them but also make them more difficult to hit with certain Ranged Skills (those that have the Line of Sight property), so moving and positioning is paramount in Companion combat. By extension, Combat Skills that move enemies can be extremely useful to get to pesky support or damage-dealing enemies in the back line or to prevent melee-heavy enemies from using Skills.

Skills vary vastly in what or who you can target with them. Some skills target an enemy (or several enemies even) while others your own Companion or Companions. There are also certain Skills that target empty positions and leave some kind of delayed effect on it (for example, a hail of arrows to strike anyone entering the position). Finally, some Skills only target the user, typically self-buffs.

Ranged Skills can target anyone on the given side of the battlefield. A subset of Ranged Skills have the Line of Sight property - these receive a flat penalty to Accuracy when targeting an opponent behind another enemy or an obstacle (thus gaining Cover).

Some Combat Skills target multiple enemies in a set configuration from one of these: 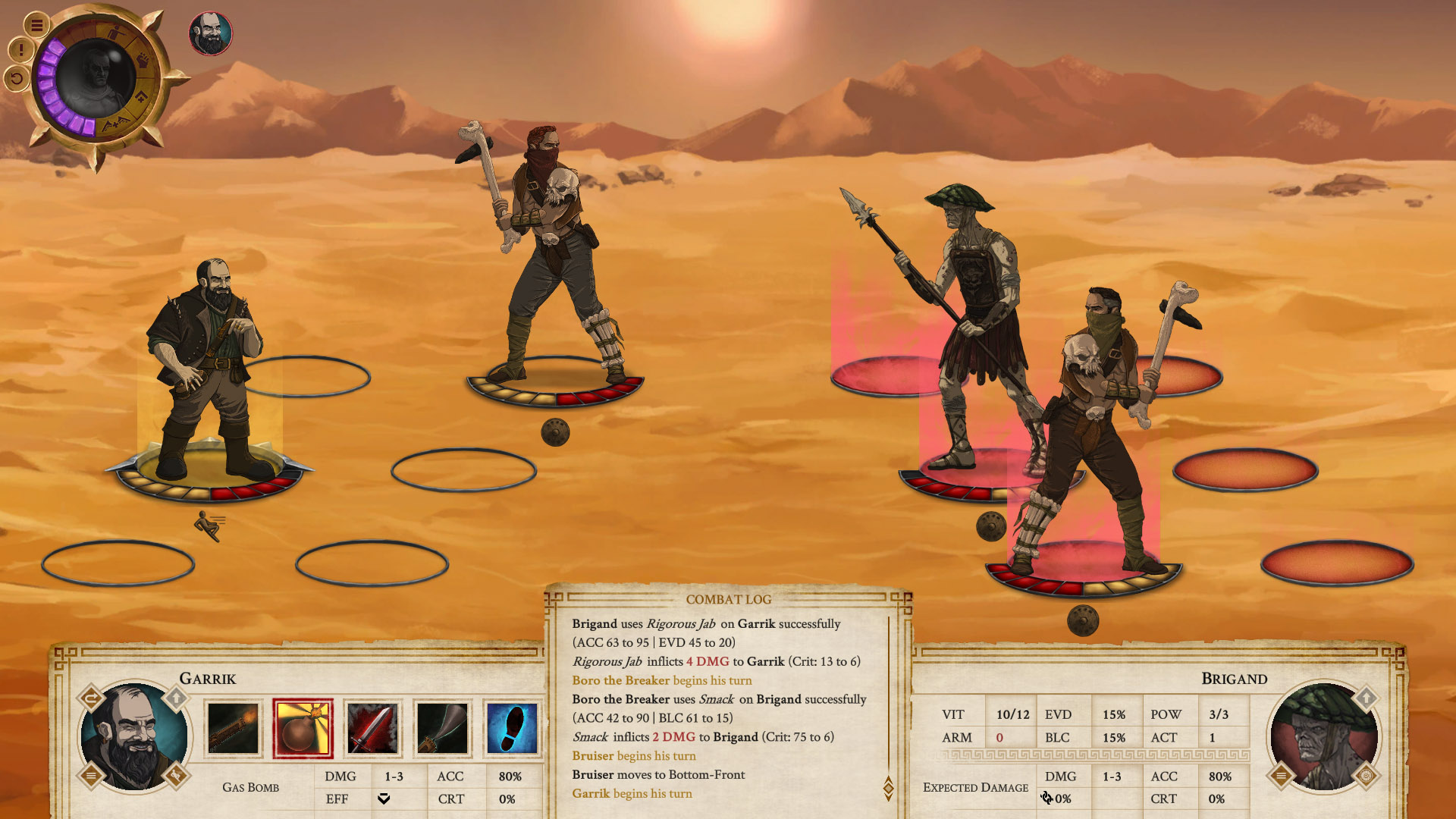 A lot of Companions and enemies have Skills that include some kind of Movement in the effects. The case is either that a Move precedes the Skill's effect or that a Move follows it. Javek's Receding Swing allows him to attack someone in Melee and then Move, which is ideal to bring the relatively squishy sorcerer to safety in the back line.

Morwen's Strafe is another great example: she hits two adjacent enemies in Melee, then receives a Move to the side. This way she can often deal damage while repositioning herself either to protect someone in the back or to distance herself from dangerous enemies.

Beside Move and using Skills, Companions also have the option to forfeit their turn. This is not only useful when they have nothing to do but outright compulsory when they can not act (for example, because none of their Skills have viable targets and they are prevented from Moving by an effect).

With every Companion and enemy having four Combat Skills and such an emphasis on movement and positioning, combat is deeply strategic and has a lot of synergies even in the Prologue. We hope you found this useful or interesting. In the next part we will talk about defenses and how they affect actions.