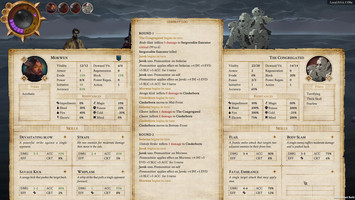 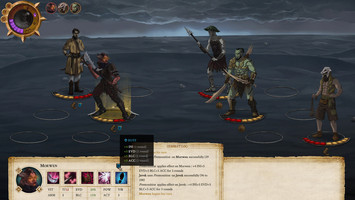 In Part 3 of our Character Design series, we discussed how a character concept gets to its final artwork state that is placed into the game. In this last part we'll talk about how characters are given stats, skills, and roles in game, especially in combat.

Vagrus has turn-based combat because we wanted to capture the tabletop RPG atmosphere and flow we know so well. It is also a fantasy game which comes with a few expectations of what roles characters fulfill in a party of adventurers. The similarities to DnD and other roleplaygames can surely be seen when observing combat and related character stats. It was along these lines that we designed our heroes (even though few of them are actually heroic) and enemies.

When we design a character for Vagrus, we first settle on who they are, where they come from, and what kind of a combat role they can fulfill given their background story, skills, equipment, and so on. Are they sturdy enough to be a frontline character? Are they good in a support role? Of course, sometimes it goes the other way round: we know we need a ranged damage dealer, for example, so we find a character in a long list of potential Companions who we can add to the game. This list comes from many years of tabletop roleplaying using the Riven Realms as a campaign setting, so there's plenty of material. This is also the time when we decide if the character will be able to fulfill a Deputy role or not.

After setting the general idea and role of the character, we start developing its combat Skills. Each of them has four (some enemies have fewer), so the challenge usually becomes having to make these several Skills different enough as well as satisfying enough, plus even at this stage, we have to think about synergies with other characters, not only between their own Skills. Many combat Skills have what we call Effect Props, that is, secondary effects like bleeding, poison, stun, buffs, debuffs, etc. These are usually not set in stone at this stage but many of them are such a vital part of a combat skill that we have to agree upon what to include.

Finally, each character's main stats are created and added. We do not dwell on this much and thus stats are assigned fairly quickly. I believe it is thanks to the fact that we've been playing RPGs and consequently designing encounters for decades now. That does not mean we get everything right the first time - extensive testing of combat helps us fine-tune character stats later on.

This gameplay-related design usually goes hand-in-hand with the artwork and when both are completed, the character is added to the game where we can test their Skills, stats, synergies, and even their decals or effects, making adjustments if necessary. What takes much, much longer is story development for the Companions. We may have the larger steps of their quests and story outlined but expanding that takes time and these are often concluded only months later.

That concludes our series in which we discussed facets of character design for Vagrus. This was, of course, a mere cursory glance into what such work entails but we hope it was successful in at least giving a picture of how we go about designing our characters. Thank you for tagging along!