Project Update - What are we working on? 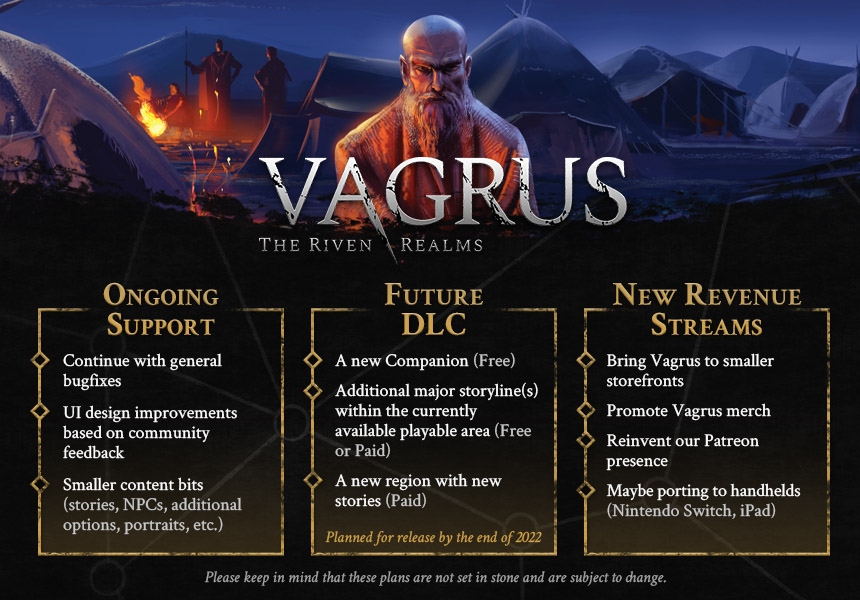 the last few weeks have been slow. Most of our team is either on sick leave or vacation, while the rest of us have been trying to finish tasks related to our physical Vagrus products or were busy formulating plans for the future of Lost Pilgrims. Bear with us though, as we are getting closer to realizing these plans. For now, let us look at what we are working on in more detail.

When you have a game full of content, you might think that it's easy to "pull together stuff" and produce merchandise from it but in reality, anything you want to use needs some rework to fit for that new purpose. Still, that was within our domain. What came as a bigger shock was how hard it was to find partners for the actual production. No one wants to deal with small order numbers or produce on the level of quality we aimed for. Just as an example, we tried four suppliers to produce our Emperor's Edition boxes but in the end, we ended up giving the job to a creator who makes them by hand because that was the only way that the final product would meet our expectations. But hey, at least now we can say they are "hand crafted".

With the little delays eating into our timeline and due to the game's rocky launch, we had to pause our merch production for October but once our hotfixes were rolled out, we got back to it and everything seems to be on track. So expect some new posts about the ready products soon.

Overall, it also means that we will only be able to start merchandise deliveries in December 2021.

We promised to share our plans soon after launch, but to do that, we needed to make said plans first: assess options and decide where and how we would like to get to with the game and with our studio.

Video games, especially indie games, often earn half of their lifetime revenue in the first month of their release. From that perspective, the launch of Vagrus was satisfactory. Not bad but not particularly amazing either. We have enough runaway to continue but we also need to find and create additional revenue sources within a reasonable time to ensure our long-term financial stability, especially considering our debt payments in the future.

With Vagrus, being short on content- and improvement ideas has never been an issue. The challenge we face now is how to split our resources between improving the base game and creating new revenue sources like DLCs, ports, and so on).

We received tons of great insights from our players. That helps us in prioritizing our endless improvement-idea list. So we would definitely like to implement some of those sooner rather than later. The question is how far we can go with those before switching to porting and other endeavors. We are a tiny team, you see, with a single coder, so presently that is a bottleneck we have to account for.

The solution to the above conundrum would be to grow the team (aka: hire more people), so improvements and other development areas could run parallel. It's a risk but one we are leaning toward taking, hoping that our community will appreciate those efforts and supports us on the way.

Of course, hiring and on-boarding new folks take time too, so if we do that, it will slow down things even more for a period of time. But then, afterwards, the new speed can be higher, so naturally it's an investment into the future.

There is little left of 2021 but we do hope to get some work done - once our team members recover from Covid - and then build on that in early 2022. So here's a vague outline of what to expect (subject to change of course, due to a number of unforeseeable reasons):

As for the latter, we are currently considering three DLCs by the end of 2022 on top of smaller content additions:

The above-mentioned DLCs can be one new source we could count on (naturally, only the paid DLCs). Their creation requires a significant investment, though, so they are not exactly a surefire way to drum up money for the future. Thus, we are trying to come up with other avenues as well. For example, once the game is fairly stable, we will be looking into potentially releasing it on other, smaller platforms (like Humble, Epic, etc). Their potential is tiny compared to Steam but maybe the effort is low enough to release on them and get access to a chunk of new audience.

While Nintendo Switch and iPads seem like two good candidates, there is a lot to be reworked on the UI to make it usable on their smaller screens, not to mention controller support, if we can solve it, otherwise, we will just need to stick to touch controls.

Having gone through the pain of creating our merchandise portfolio, it would be great to leverage that better and make it into a revenue-generating thing. We will just need to figure out ways to promote them better without breaking our Steam developer agreement.

With the game released, we need to revisit our content pipe anyways, so it's also a great time to consider how we could offer other and better things on Patreon that would be appealing to more people to pitch in. We'd love to hear your input on what you think we could do, like offering Tiers that include physical merch rewards, perhaps? Would you see more, exclusive posts about the world of the Riven Realms or perhaps about the creation of the game? Let us know.

As always, thanks a lot for your continued support, it means a lot to us!

If you like Vagrus, please consider sharing our pages and posts with your friends through your favorite social media channel(s). It is much appreciated!