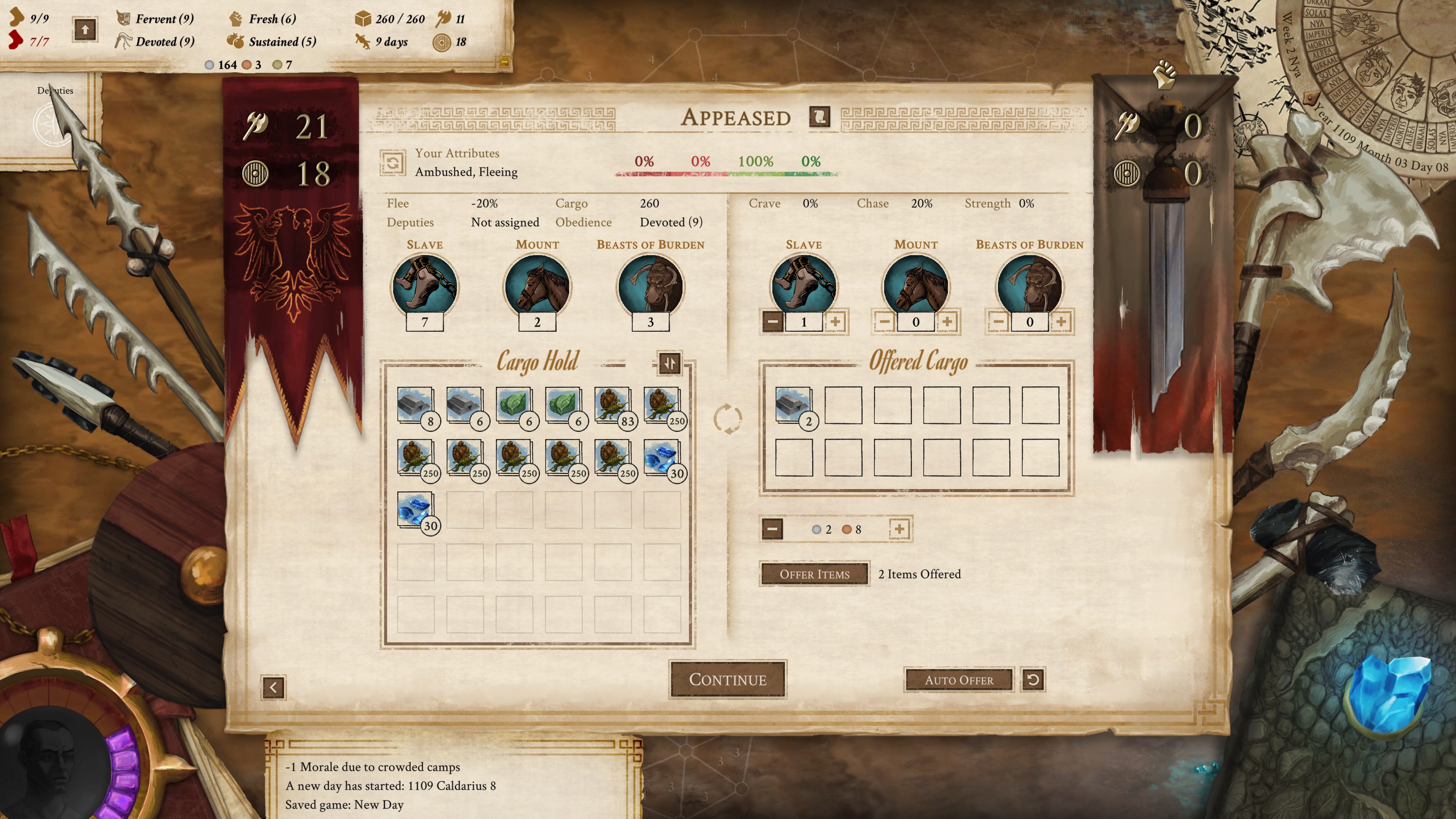 The perfect example of all this is Crew Combat in Vagrus, which is an aspect of the game that players complained about fairly regularly. After adding the Flee/Appease option, it got slightly better but not as much as we had hoped. While digging for the reasons, we came to some interesting realizations. Whenever we heard someone getting irked about how they bled out against a much stronger enemy, we asked whether they tried appeasing them and they pretty much all said "No, 'Flee' implied losing big time".

So we renamed the button from Flee to Buy off/Lure Away to better indicate the appease options lying underneath it. It got slightly better again. Yet many players still ignore it. When we asked why, we learned that they had a bad experience with it. They used the Auto Offer function that gave away all their slaves, which in turn resulted in a workforce shortage and sent them into a death spiral. Boom. Never touched the option again.

The Auto Offer function was indeed something that we left unfinished. It only offered money and crew, but not cargo, nor items.  Thus, it often proposed a deal that was far from being optimal. So from the player feedback, "Crew Combat is insanely hard" we got to "a small piece of the Appease feature was left unfinished and coupled with no explanation, it led players to fight unwinnable battles they should be just avoiding".

The good news is: we are adding Item Offers and shoring up Auto Offers in the next build. And hope to see more players get the hang of when and how to avoid fights that are way out of their league.

Items are a resource that is often overlooked. They have no weight to be considered in the cargo hold and can accumulate silently. Items looted from events or combat encounters can turn otherwise unfortunate ventures profitable - if sold in the right place.

It also makes sense that these valuables be traded or used during Crew Combat appeasing. They can even add new flavor, since the various enemy types are interested in different items - tribal folk in trinkets and charms while Necromancers in ancient tablets and arcane texts. We even decided to introduce beast lures and Undead charms that are highly effective against those kinds of foes. 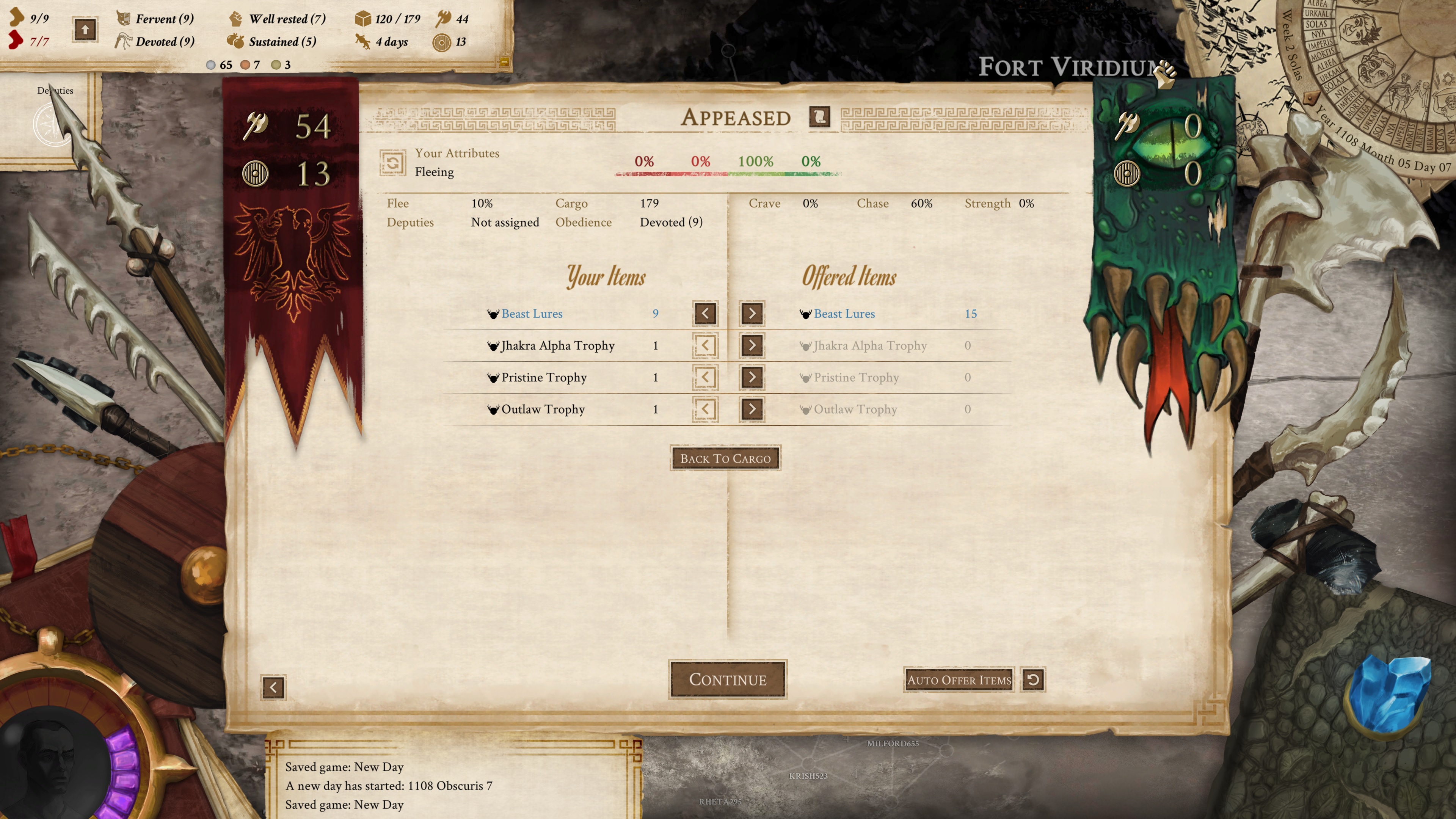 Items are split into two categories. Well, more like three. The items listed in blue are the ones that will help the player the most to successfully Appease the enemy (or aid their Flee in case of Beasts or Undead). The second group lists the items that can also be used but with less efficiency. There is also an implicit third category of items that the player owns but cannot be leveraged in the given situation.

With Item Offers added into the mix and considering the feedback we deciphered, we spent some time shoring up our Auto Offer logic, too. For one, now it offers cargo and items as well, though it does not apply advanced mathematics to optimize the offer, there is an underlying logic that takes the enemy's goal into account. It will offer Supplies and edible goods first to voracious opponents, valuables to looters, mounts to poachers, and so on.

We think - and hope - that these changes will bring us one step closer to addressing some of the unintended difficulties players face in the game as we continue to improve other features as well.

As ever, we are immensely grateful for all the support and feedback!

Stay tuned and conquer the wasteland,