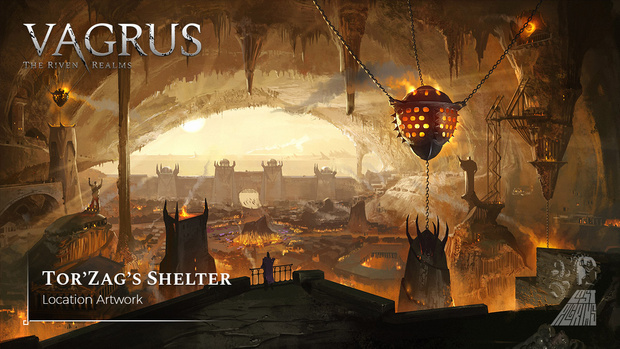 Tor'Zag's Shelter is a vast, dark city in the belly of the Blackblood Mountains, carved out mostly by Imperials after obsidian became scarcer in the region and the fleeing armies of Warleader Tor'Zag, an Orc general, capitulated, leaving the tunnels beneath the mountain at the end of the Orc War. People who lost everything came here to share respite from the scorching sun of the Jagged Waste with traders who were looking to establish a way-station between Deven in the north and the Province in the south. Now, a couple of hundred years later, the Shelter is among the five greatest cities of the continent.

Our old tabletop groups know the iconic location all too well, as it used to feature prominently in our campaigns. Chances are, you will see it a lot in the game as well, as it is the capital of the region we're opening up first for the sandbox part of Vagrus (and one of the largest cities on the continent as is). The artwork by Peter Kovács is breathtaking as always, showing an ominous view of the dark city from the elevated terraces of the Temple District. You can see the roof villas and side-caves where the city's rich and poor make their abode, respectively. Several great statues are dedicated to Sergorod, God of Vengeance and Rage, who is considered the protector of the Shelter. Magically imbued iron-wrought chandeliers provide light in this ever-twilit place, enhanced by ancient Dwarven metallurgical techniques as well as by runes and glyphs.

We are very excited to see how players receive Tor'Zag's Shelter as part of the open-world campaign of Vagrus. You can gaze at this fantastic artwork to get you in the right mood for exploring the dark secrets of the Riven Realms.