Based on the ton of feedback concerning initial difficulty and learning curve, we have listened to you, our players, and implemented Trade Tasks to make the initial experience smoother in the open-world campaign. While there, and because they are deeply intertwined, we also decided to include the brand-new Factions UI and the faction tier system. We were happy to see that everyone who tried it in the preview build loved it and we are also satisfied with the result. To top it off, we also have a long list of adjustments, fixes, and tweaks (see patch notes at the end of this post).

So what's in the current patch?

According to players currently testing the open-world campaign, it is hard to make a living as an independent comitatus in the Empire. That was an intended design choice because almost all the trade is controlled by factions on the continent, be they Trading Houses, religious organizations, or criminals. With their Imperial trading monopoly licenses or their raw negotiating power, factions buy and sell at significantly better prices. With that in mind, we have planned to include a Task-system from the beginning and now we finally implemented it. 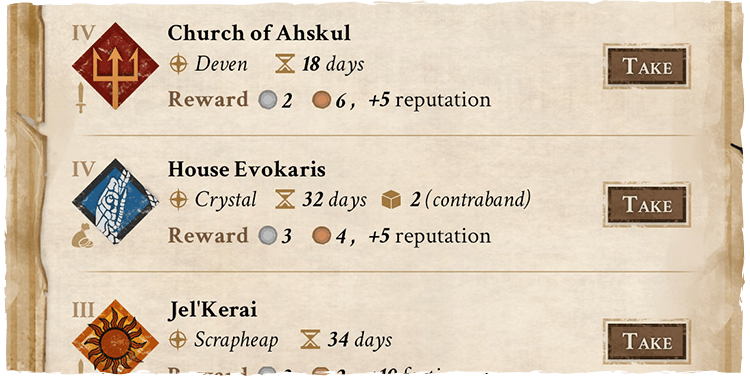 What we call Tasks now in Vagrus are essentially procedurally-generated contracts offered by factions. If you fulfill the Task, you get rewards and reputation with these factions. At this time, we are concentrating solely on Trade Tasks, though there are going to be other types later on. The main goal of the Task system is to allow players to ease into the open-world part without having to have an extensive meta-knowledge of what can be bought or sold for a good profit in the different parts of the Empire. While completing these Tasks for a fixed commission, players also earn reputation points with factions, gaining access to higher tier Tasks, better market prices, and one-time rewards. The design considerations and building blocks we are using for Trade Tasks are as follows:

We have long been talking about improving the experience with factions in Vagrus. They are currently in the game and can be interacted with one way or the other but there is no UI to track your standing with them, nor is it possible to claim rewards for each unlocked reputation tier (although there are already a lot of implicit benefits and rewards for high reputation with almost every faction). With Tasks being implemented and so intimately intertwined with factions, we thought we'd give you a rundown of what to expect from this next large addition to the game.

In short, factions are organizations you can gain reputation with. Enough points unlock tiers of faction standing that award the player with all kinds of goodies: discounts, items, equipment, and better-paying Tasks, to name a few. Factions are often at odds with each other, so gaining reputation with one might lower reputation with another or two. You can lose standing, which results in losing the passive benefits of that tier (although not the already possessed rewards). Most factions also provide quests and other content with the right tier unlocked. 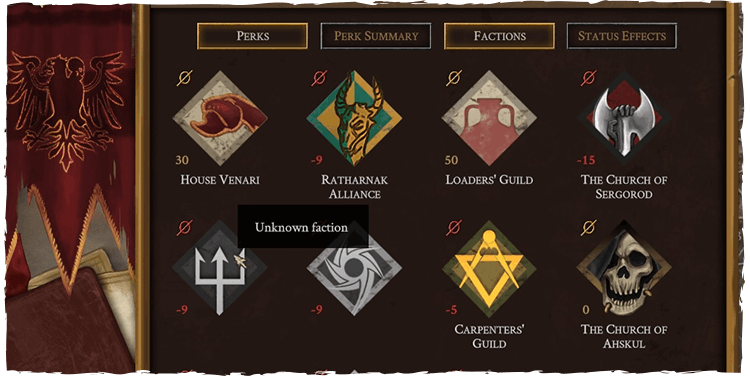 There are several places where you can find factions on already existing UI elements. First and foremost, factions appear as a separate UI tab under the Leader main UI (since faction relations belong to your character the vagrus). You can check your standing with all factions here as well as what each tier provides, read about factions, and check on their allies and enemies. Apart from that, factions also appear on the settlement UI, where Tasks can be taken, turned-in, and rewards are redeemed, provided the faction in question is present in the given settlement. Faction presence is also varied, with headquarters allowing for the most interaction. Most factions have a presence in large cities, though.

The Factions of the Riven Realms

There are 11 factions currently in-game, though several of them are partially implemented and will be fleshed out more with upcoming content patches. Some of them you have already encountered when playing the Open-world campaign, like the Church of Sergorod, the Ratharnak Alliance, the furtive Abolitionists, or one of the Imperial Trading Houses.