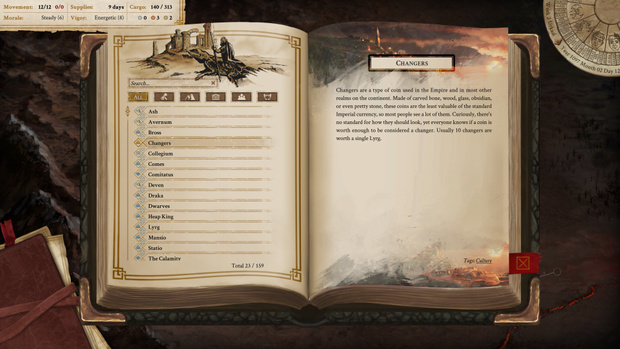 The Riven Realms has been around for over two decades now for us who created it for our tabletop campaigns, and the setting has quite a lot of currencies, even if one only considers the continent of Xeryn. When we set out to develop Vagrus, we picked three coin types not to overcrowd the UI: the Lyrg, a copper coin; the Bross, a silver coin; and Draka, a rare and very valuable golden coin. These are all coins that are used fairly often in large-scale commerce on the continent, and they are also fairly easy to identify as the copper-silver-gold trio of currency is fairly common in historical and fantasy settings.

Problems arose soon from the fact that a lot of common, everyday things are bought and sold for a smaller currency called Changers. For example, food for a day typically goes for around 2-3 Changers, or the daily wages of a worker are also typically around that sum. However, we had no Changers, so we implemented Supplies to represent 10 points of Consumption each. Individual crew wages were raised to 1 Lyrg - the absolute minimum - but this started an internal inflation that led to the rise of a lot of goods and services to make ratios match the world and to allow vagri to earn enough to pay upkeep. Unfortunately, this led to a situation where Drakas became very common, even in the beginning of the game, which in the metal-starved world of the Riven Realms goes against the lore and atmosphere, eroding immersion.

Recently, us Lost Pilgrims decided that Changers have to make a return, and they have to do so before the Open World campaign launches (otherwise the change would mess with saved games later).

At first, you might think this is a simple decimal shift, but it sent ripples out that shook most areas of the game in one way or another.

On the technical side:

On the design side, things were looking much more complicated:

Overall, we are happy that we went with the change (of Changers, heh...) despite the added work, especially because it would have been much more problematic later on. Additionally, our tabletop RPG souls are now at rest that the setting and the game are not at odds. :)