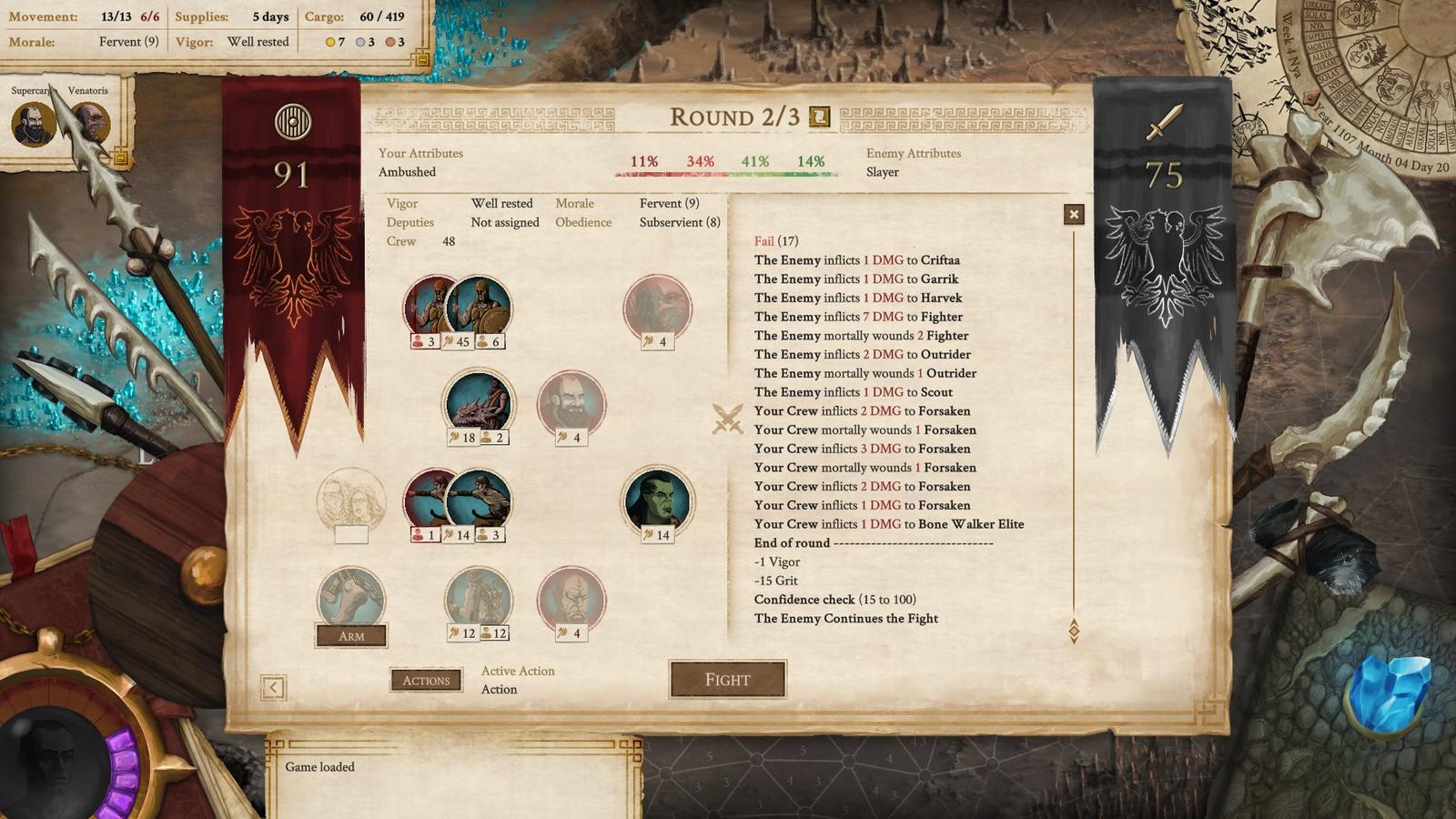 Crew Combat is the most common way you will handle violent conflicts as you roam the wastelands of the Riven Realms. We wanted to give you a rundown of the basic concepts here so that those interested might find some insights.

Each Crew Combat encounter identifies the two sides as either the Attacker or the Defender. The player's comitatus can typically be the attacker when they raid small settlements or prey upon other travelers, while they are often found as the defender when getting accosted by monsters, outlaws, or worse.

When you are the defender, a hidden test is made based on your comitatus'  vigilance against the attackers ability to ambush (various stats govern this test). If you are ambushed, there are serious penalties on your Combat Strength, representing your inability to set up your fighters properly. Other than that, you will be restricted in the use of Combat Actions when they are added later to the game.

Whether you are ambushed or not, a fight is about to go down. 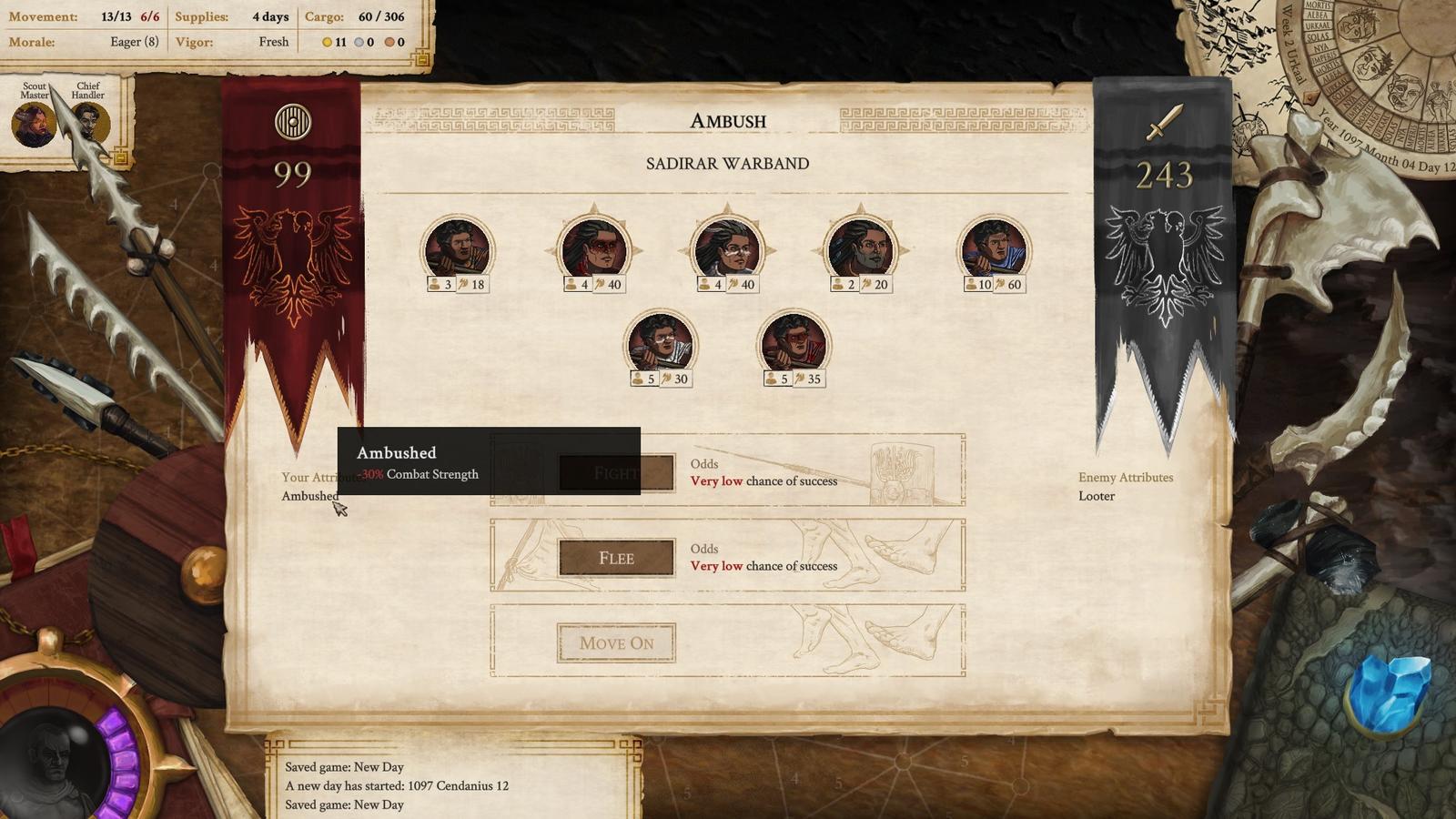 In the current builds, the only option is to fight. At a later stage, we intend to add a Flee option, though it will not be a reliably successful option. You can increase the chance of success with offering what the attackers demand, like offering 'bribes' to bandits, or leaving supplies for monsters. Appeasing the enemy will not always be an option: mindless Undead or motivated bounty hunters can not be bargained with.

Nevertheless, fleeing results in losses, but - in most cases - less so than trying to defend yourself in an unwinnable fight. 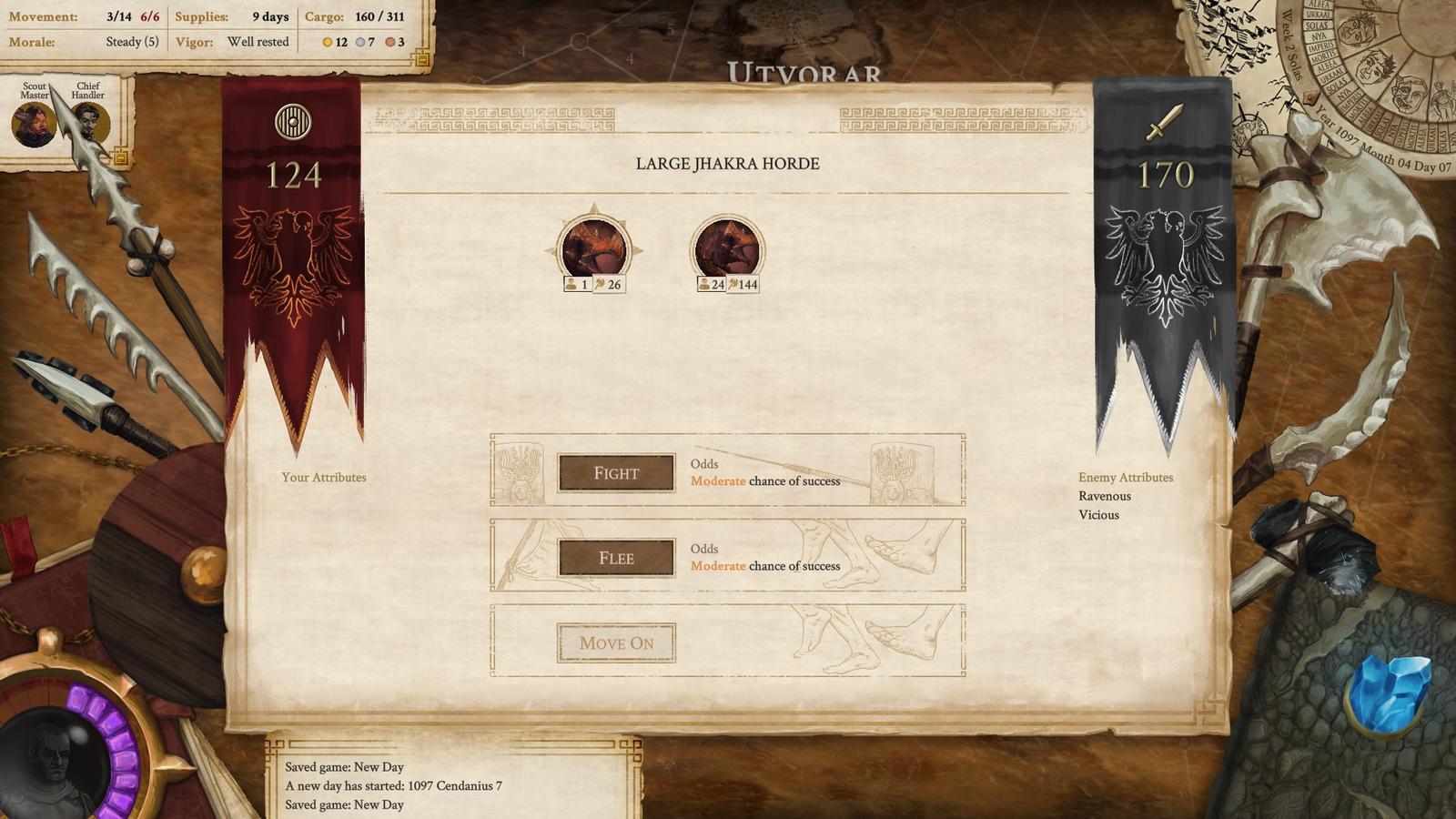 If you are the attacker, you have the option to leave the opponents in peace and just Move on. This might be useful when not wanting to fight because you are already bruised, when not wishing to upset a certain faction, or when bumping into something you probably can not handle. 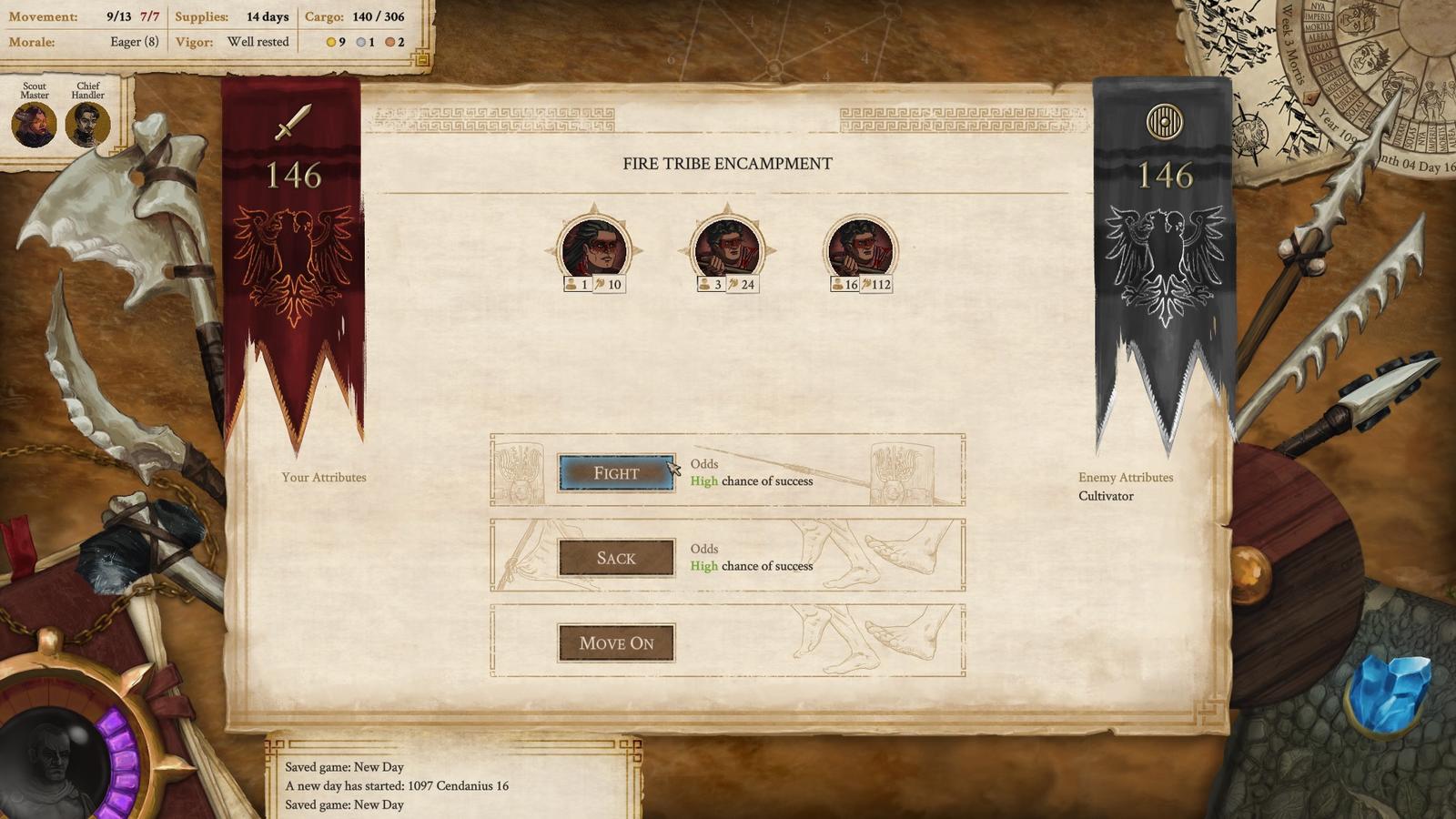 If you do decide to attack them, however, you need to first select a goal. This is mostly dependent on the type of enemy, and involves things like looting their cargo, trying to catch some of them to force them into slavery, and so on. Some options may not be available, like on image below you can see that the enemy has no mounts, so Poach Beasts can not be selected. 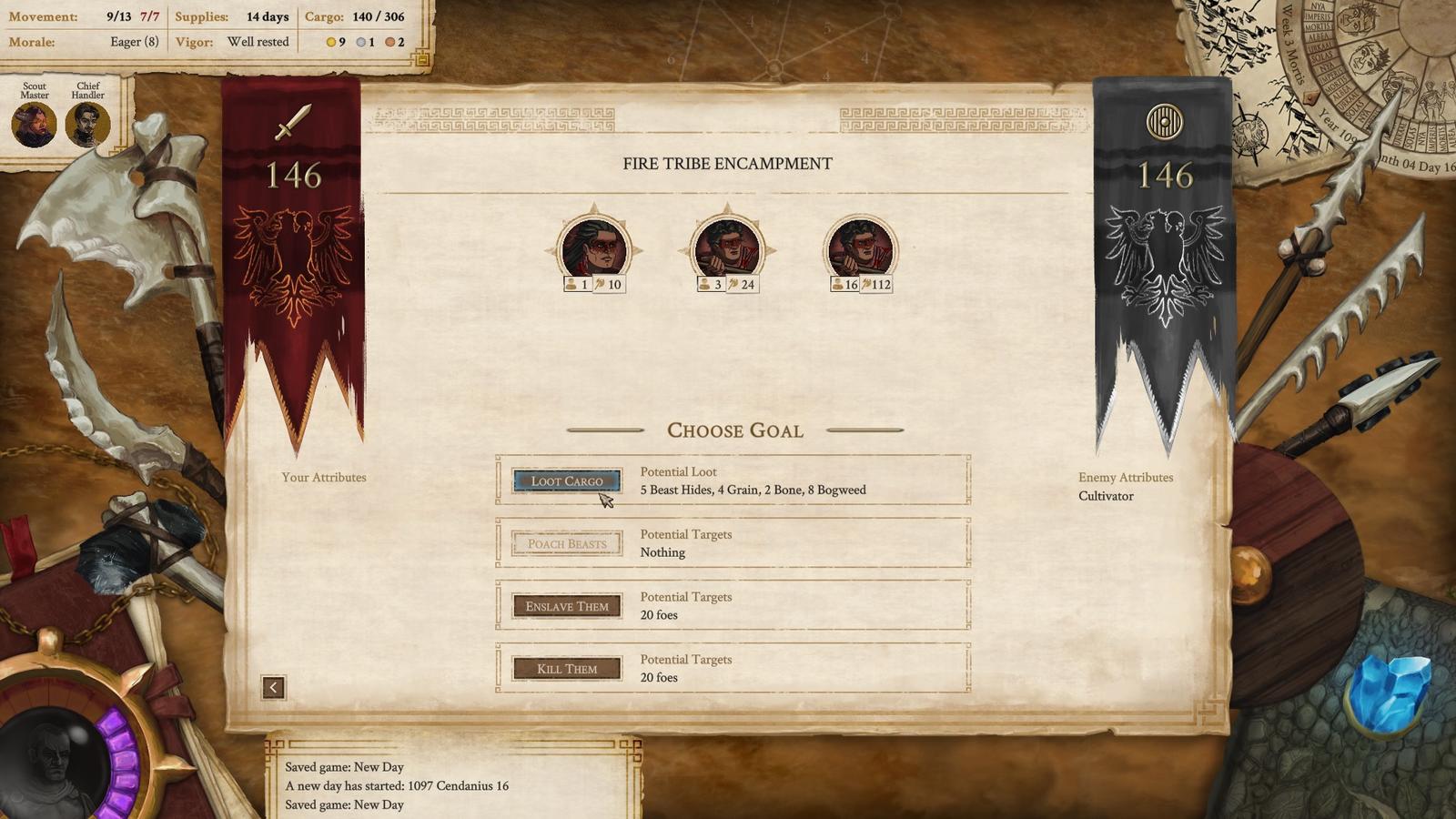 Once you get into the actual combat, your forces are shown on the left, while the enemy is on the right. The Combat Strength (CS) total of each side is displayed on their respective banners. One side will have to defeat the other in no more than 3 combat rounds.

Your CS is mainly calculated from the crew that takes part in the fight: fighters, scouts, outriders, and of course Companions. Vigor and Morale have significant impact on CS, and there is also equipment as well as conditions that can influence its total value.

Slaves and Passengers can be also be armed for the fight, but only at a considerable cost. 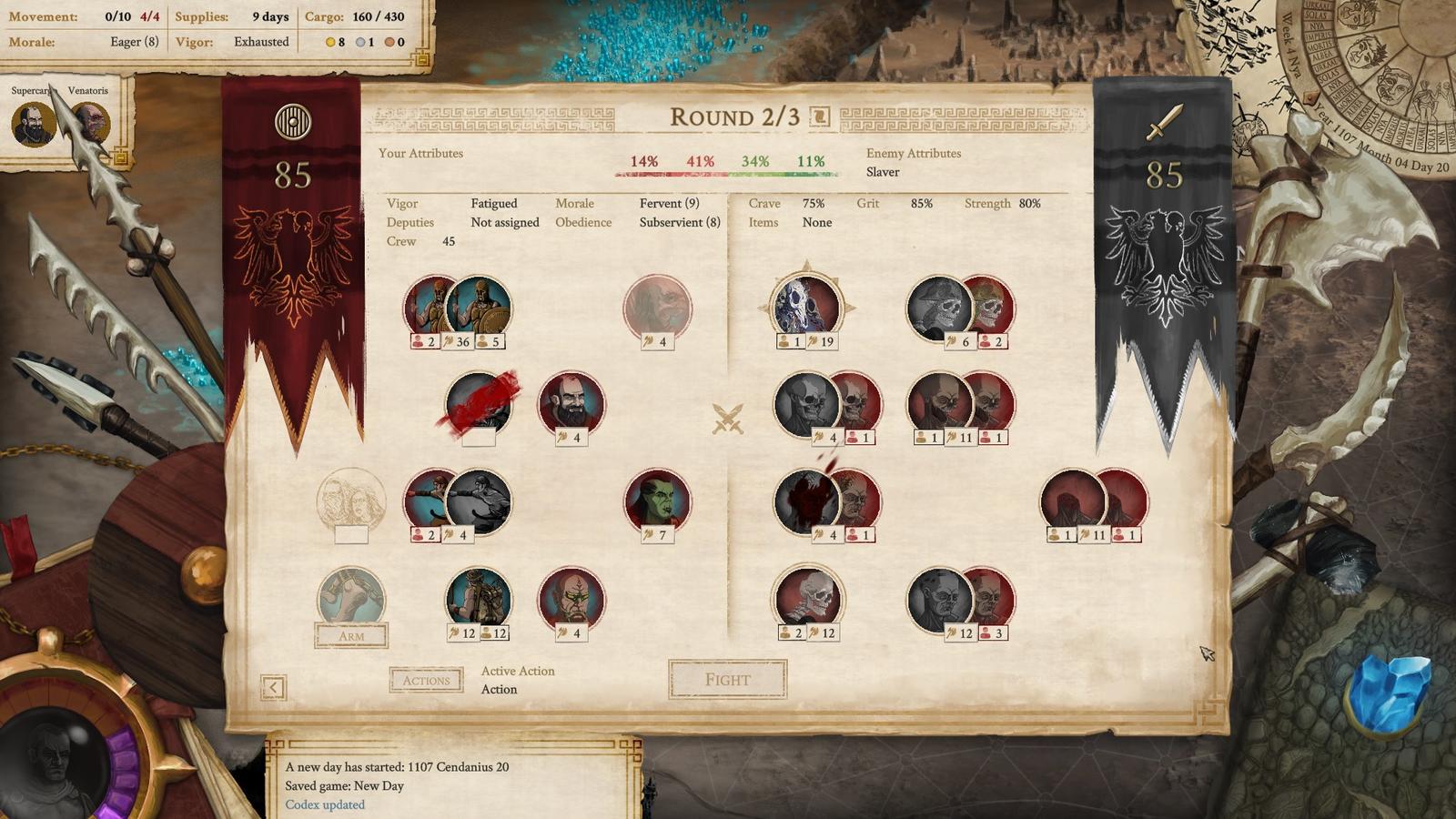 Why not send everyone in every case? Well, because you risk the lives of those who you pick to fight and you might want to prevent that. However, if you sustain significant damage, your non-fighing crew can be slain as well regardless. So sending forth only a small team is often ineffective, too.

In another conflict (image below) we did have the option to poach beast, but it turned into a botched attempt: many of our crew members got wounded. The red circles around their portraits indicate a wounded combatant. By default they are taken out of the next round of fighting so you do not risk losing them but sometimes you need to send them into fight regardless (to avert greater losses). 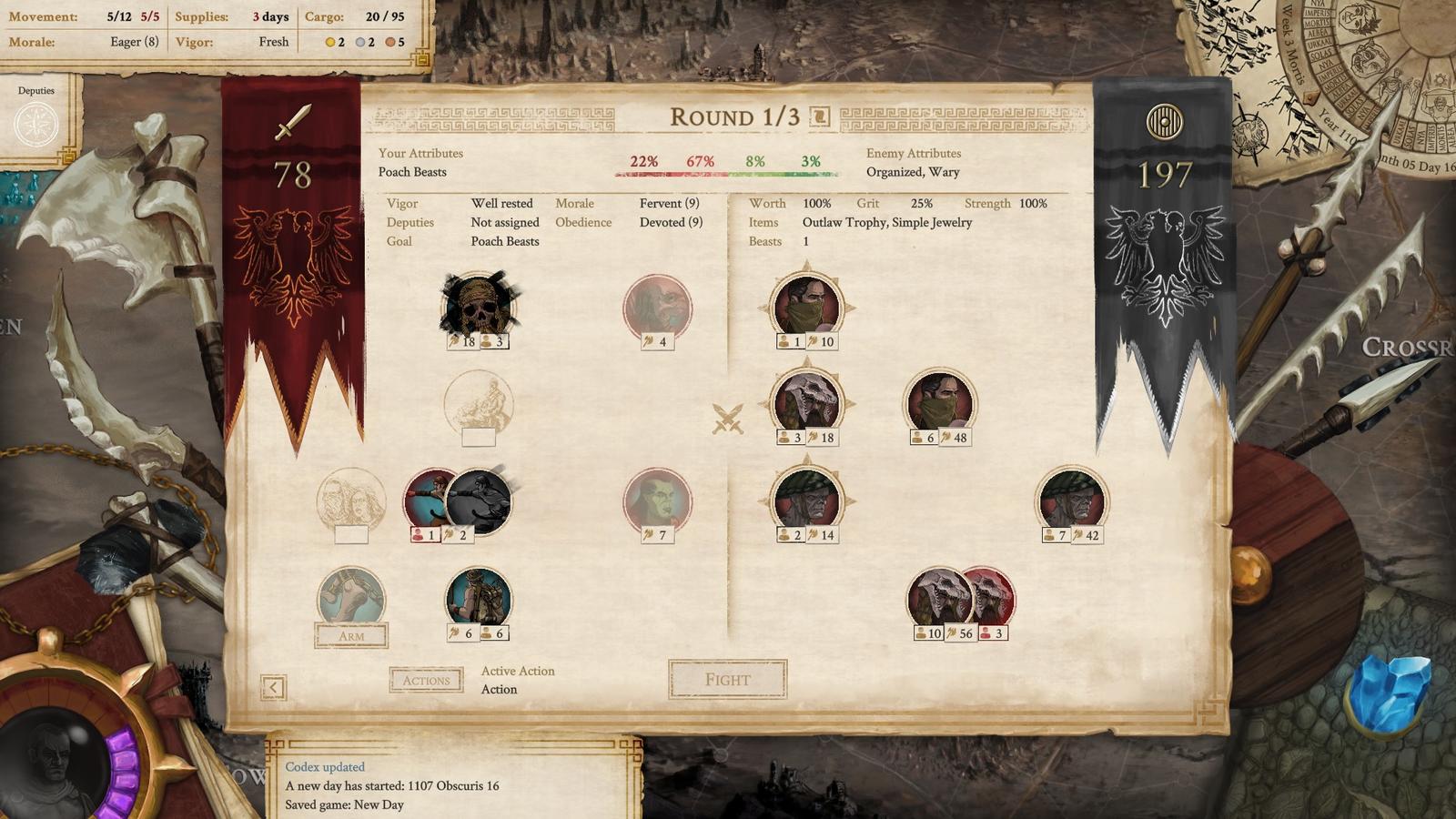 As stated above, Crew Combat normally lasts for 3 rounds. Each round, a roll is made to determine whether the player wins or loses the round. Outcomes can be Critical Failure, Failure, Success, and Critical Success. The percentage boundaries for these are calculated based on the compared CS of each side.

If there is no definite combat result by the end of the third round, an 'aftermath' round follows that calculates the final result. 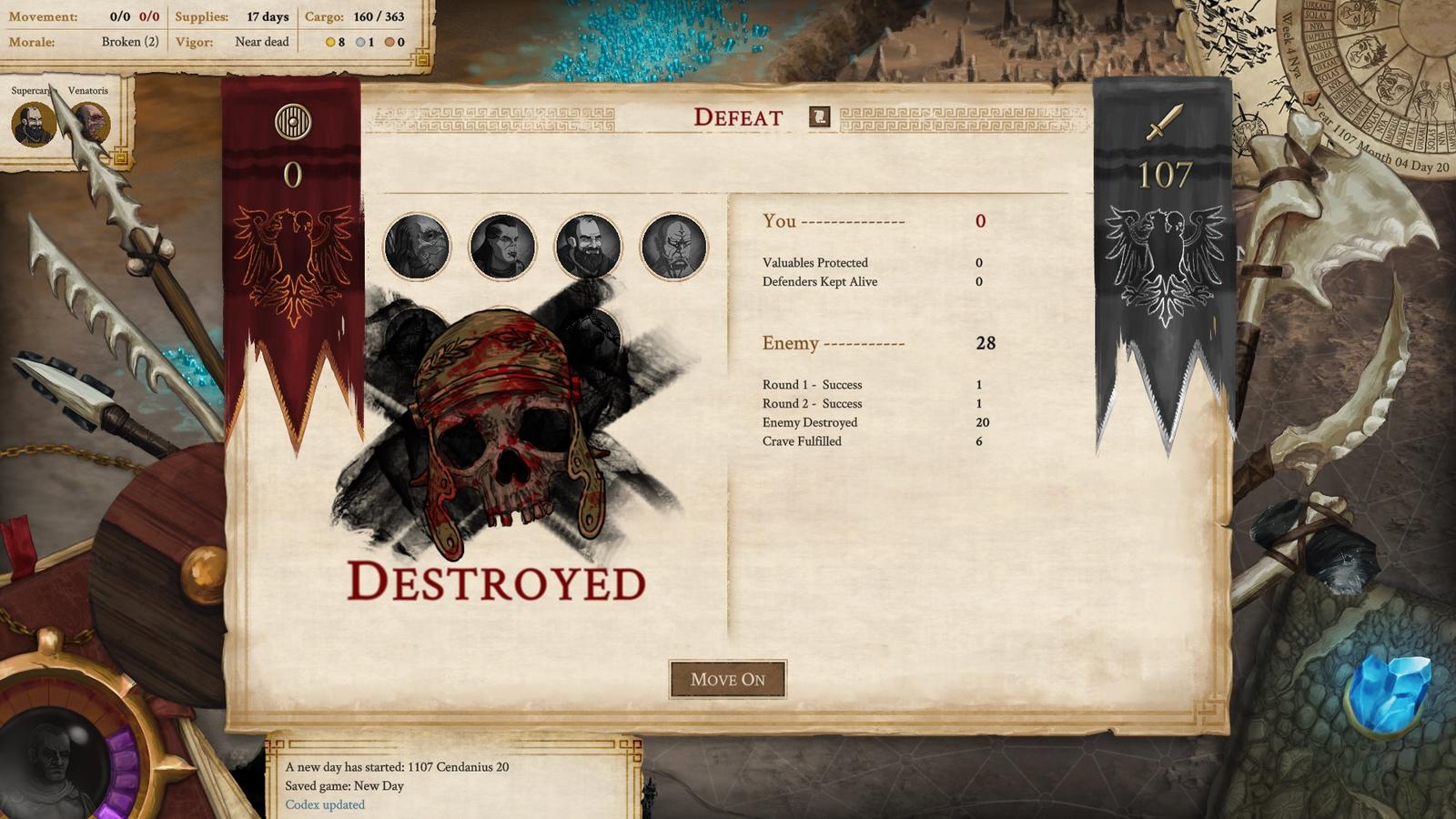 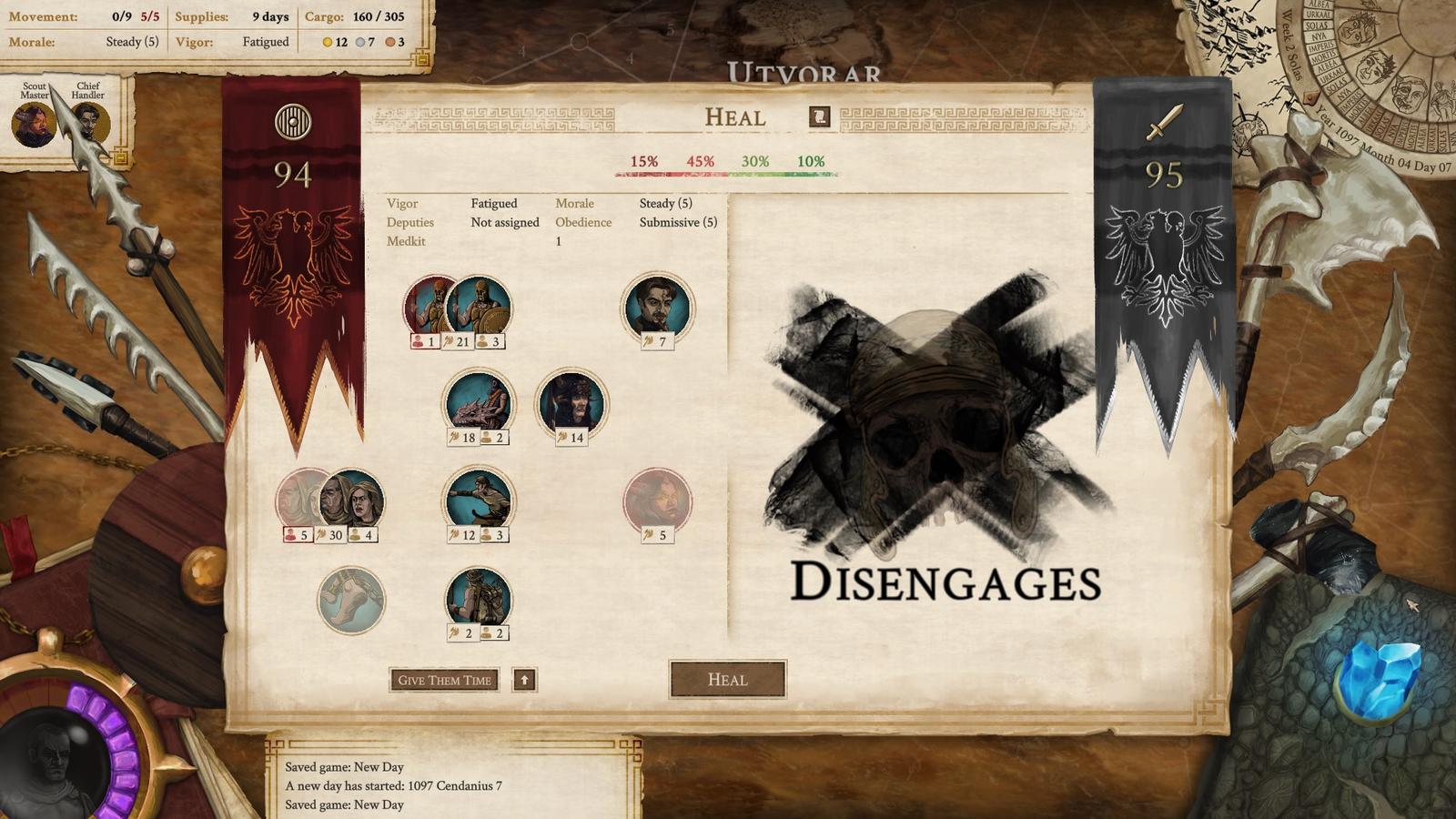 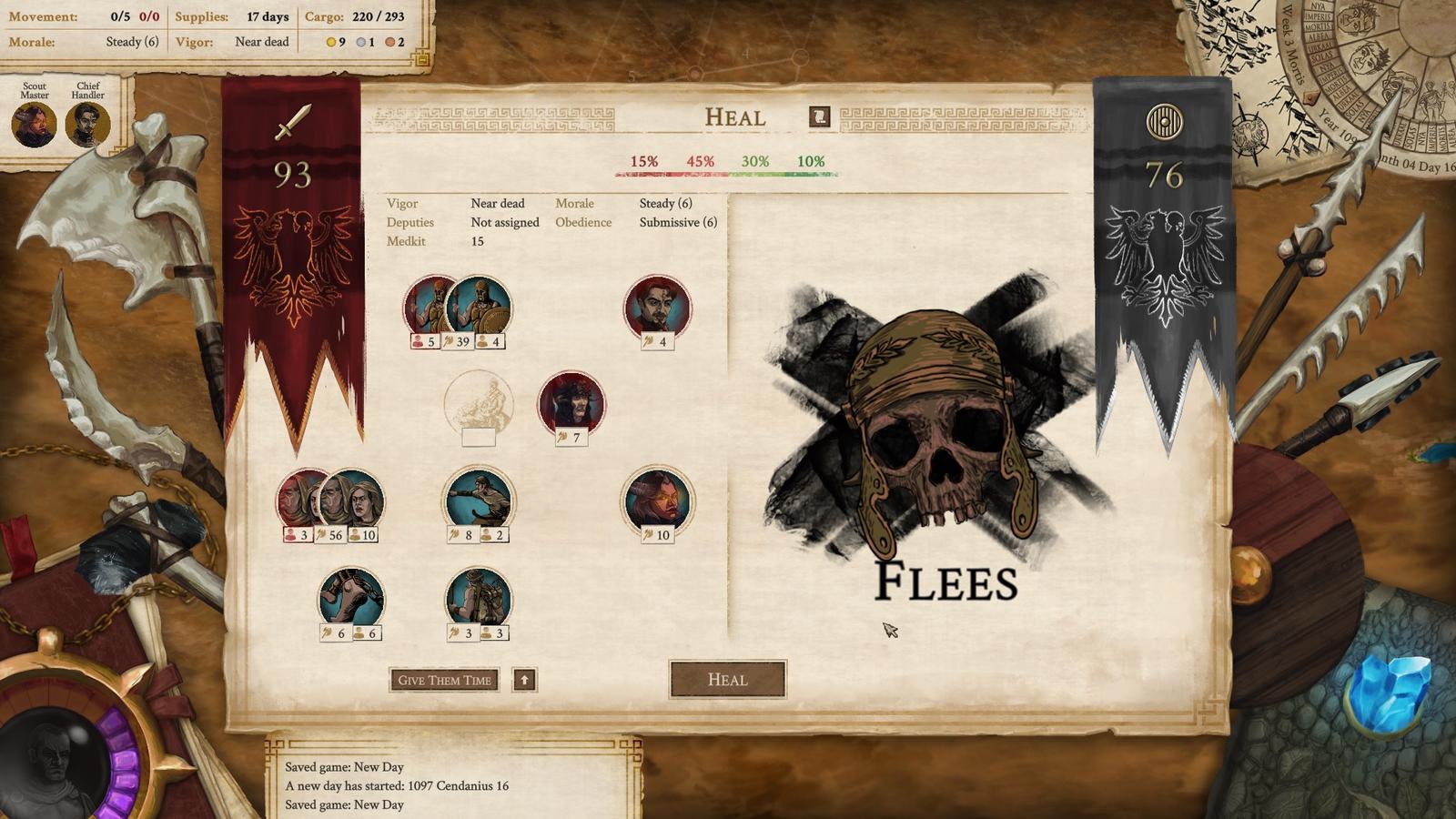 If the comitatus survives the fight, a Heal phase commences, in which your skills in healing (along with that of your Companions' skills and your store of medical supplies) determine how many wounded crew members you can save. 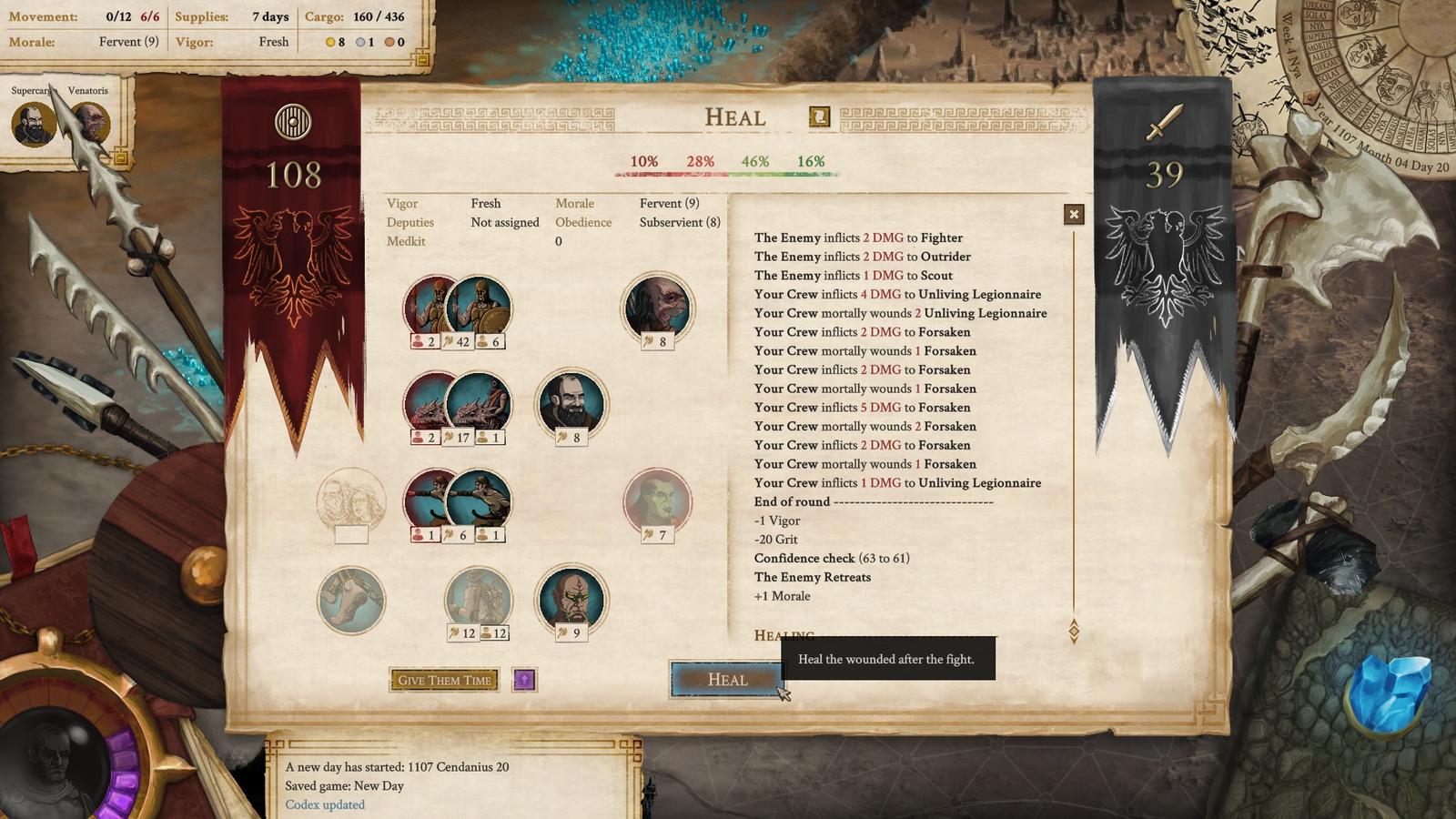 So how does victory come about at the end of all this? Well, during combat, both sides get points for Success and Critical Success attacks. Attackers gets points for snatching goods or other things according to their initially set goal. Defenders get points for preventing the attackers in said goal and also for keeping their crew safe, which is represented by the percentage of crew that survives. 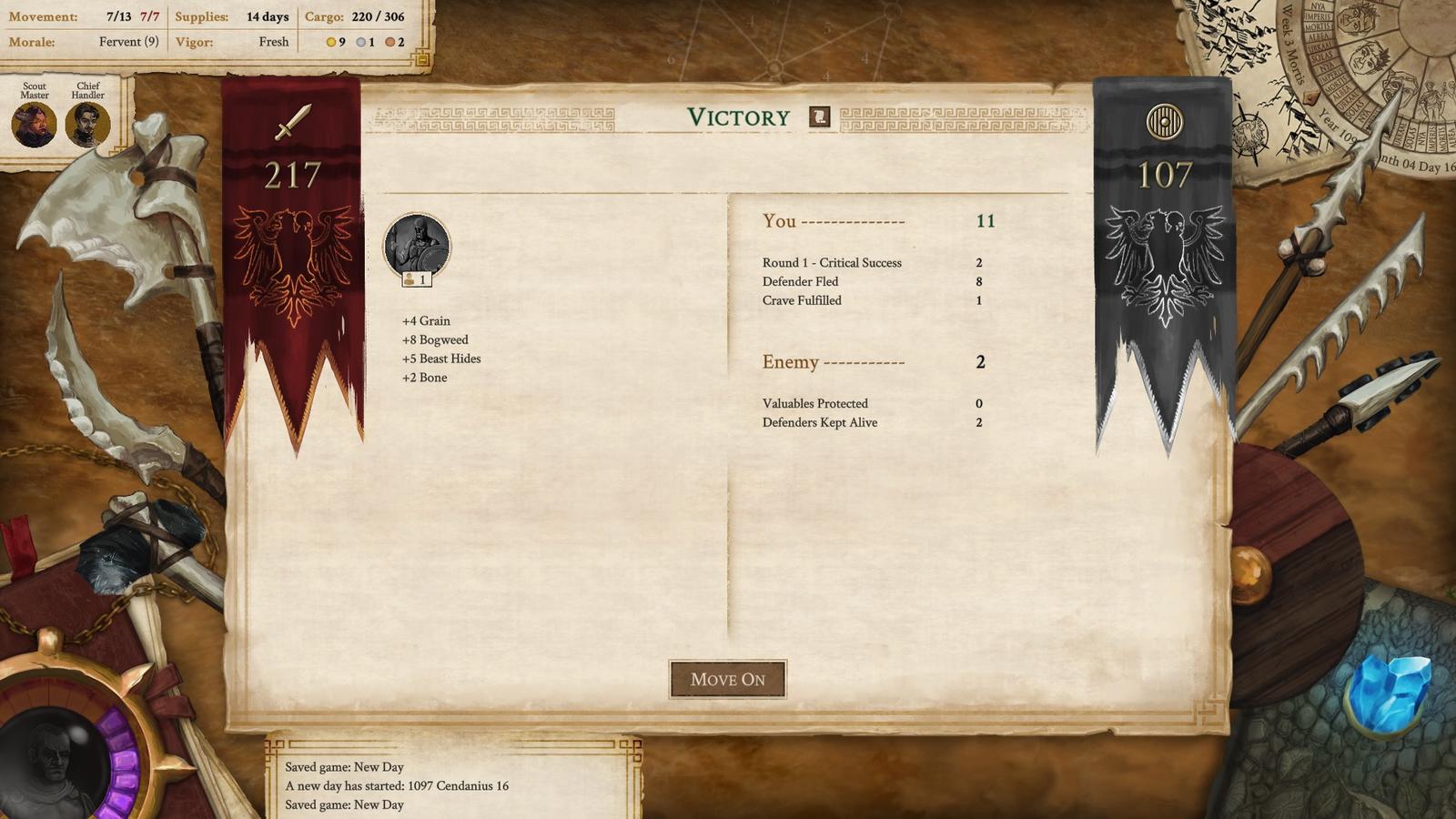