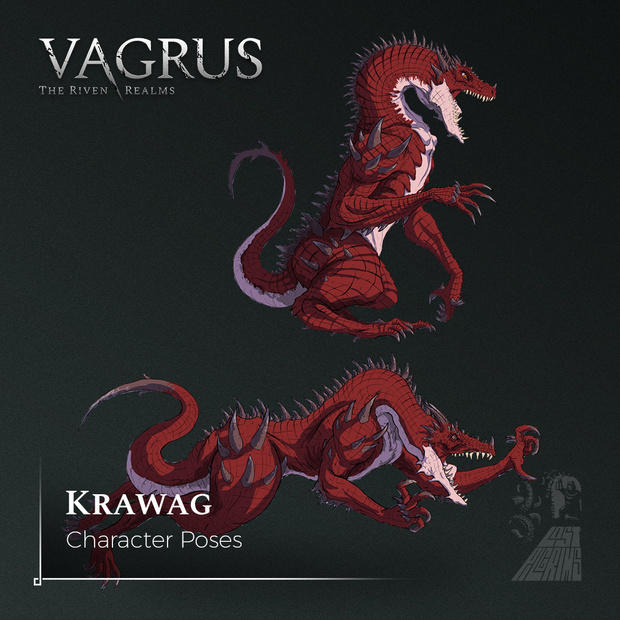 The Krawag - draconic reptiles bred to be hunter-killers or guard animals - are easily among the most dangerous enemies in Vagrus. Some of them go rogue and live the solitary life of an apex predator in the cruel wilderness of the Riven Realms, giving vagri like you trouble; others are captured and sent into arenas for entertainment; while still others roam the land in the service of the Dragonlands and its armies.

Large creatures taking up two spaces in Companion combat, Krawags are notoriously difficult to kill, have keen senses and tremendous agility (giving them high Initiative and Evade), and field an arsenal of mundane and regular attacks that can test the might of even your strongest Companions.

Dragon Claw: The Krawag leaps at a single target, causing moderate damage. This attack has a high critical strike potential and the Accurate perk, making it more difficult to Evade. The Skill's higher level iterations cause bleeding, too.

Breath Attack: Though one Skill, this attack is different for each breed of Krawag. Red Krawags breath fire, Blue ones lightning, Greens acidic poison gas, and so on (you can even encounter the Black Krawags and their feared green flame). Every flame has a different type of magical damage that ignores most defenses and also a secondary effect that applies of the target does not resist it. For example, being hit by the Green Krawag's gaseous attack debuffs Initiative, while the Arcane breath of Opal Krawags causes the target to be Pushed.

Fast, cunning, and sturdy with a ton of damage potential, Krawag are difficult enemies players should learn to treat with caution. Their only weakness is, perhaps, that they are rarely encountered in the numbers, so a larger group of Companions may be able to overwhelm a lone Krawag. When they are it does not bode well for their prey.