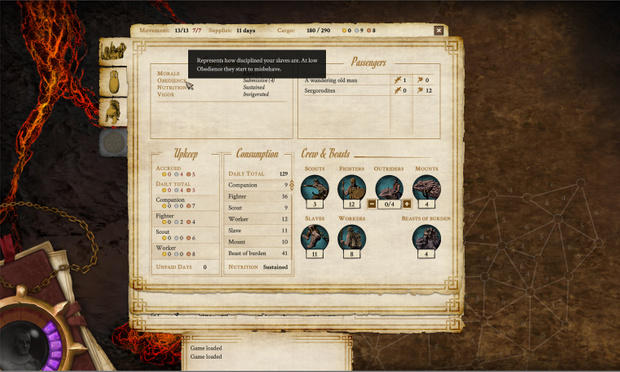 Obedience is a stat describing how disciplined (or disgruntled) the slaves owned by the comitatus are at a given time. It was implemented to give a rather fluid drawback to owning slaves: they might provide a free workforce but keeping men and women enslaved does have its risks even if it is 'part of the system'. You typically lose Obedience if you do not guard your slaves well enough (too few fighters to look after them), if you get or buy a lot of new slaves, if you do not feed them enough, if you arm them in Crew Combat, or keep choosing options in Events that endanger or embolden them.

With a high Obedience, your slaves over-perform and you can end up with some small surprise Events (with a positive outcome). This is in addition to the fact that you won't get a headache thinking about what can go wrong.

Low Obedience is where it all goes from bad to worse. Slaves start to steal, escape their bonds, or even commit more serious crimes. You can try to punish all the slaves in this case in the hopes of raising Obedience but it can backfire.

So how can you keep slaves in check? Well, a thoughtful vagrus might consider liberating slaves from time to time, which raises the Obedience of others to a great extent - if there is a chance of becoming free, they will work more diligently towards it. Nevertheless, it is a very expensive route to take, as slaves cost a lot of coin. Then there is the Deputy role of Slavemaster, who generates Obedience, making a critically low score very unlikely (and also can punish unruly slaves more reliably). Some equipment also has similar effects. Additionally, certain Events can positively affect Obedience and it behooves you to pay attention to those.

But if you could easily influence everything about Obedience inside your comitatus, it would be too easy, right? And this takes us to Unrest. Unrest is a region that belongs  to regions in the game. In most cases, there is no Unrest but from time to time, dynamic changes can occur during the game that raises this stat: Abolitionists or other elements cause strife among the slave population, or your own actions can cause Unrest to change, and this can easily affect your own slaves. Thus, high Unrest lowers your Obedience - the longer time you spend in such regions, the more Obedience you'll lose.

All in all, we've been poised to implement a fairly complex system to make your journeys interesting and in-depth mechanics-wise, and we feel that Obedience-Unrest is a great part of that. We are very excited about how players will react to this when the Open-world campaign opens up later this year.